Clear filters
Home NewsMoscow team in a track race for blind. They competed with DRAG tandem. 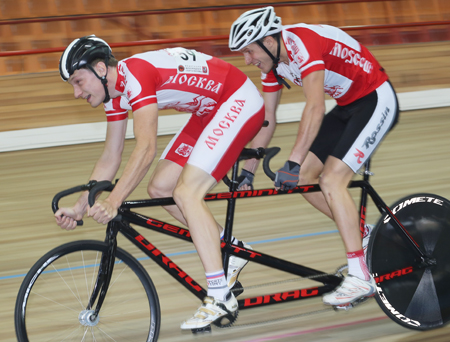 From 8 to 10 October in Moscow was held the Russian Track Championships for blind racers, in which for the first time participates the team from Moscow. Moscow boys Leonid Tuthill, Arthur Spirin competed with DRAG tandem.
The format of the event includes the participation of two players in tandem, in which the second racer is blind. In this type of competition important are not only the physical characteristics and abilities of the players, but also the partnership between competitors who conducted many hours of training together. The team was formed in Moscow just days before the championship, but the first day the couple Ttin-Spirin reached third place of 1000 meters of space. On the last day, the tandem Tutin – Osipov is ranked 6th place in the course of 4000 m run.