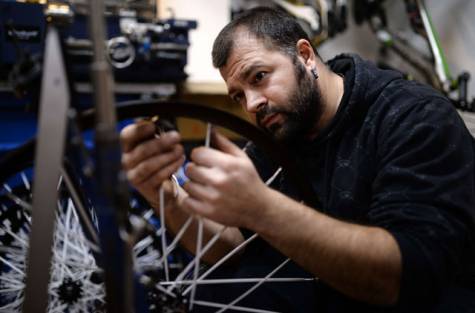 Bulgaria’s economic outlook may be gloomy but Dragomir Kouzov, founder of bicycle manufacturer Drag and one of a new breed of niche entrepreneurs in the EU’s poorest country, is anything but.

“My motto is ‘I believe,'” the smiling and energetic 52-year-old former professional cyclist, enthused to AFP, one of his state-the-art two-wheel creations suspended on the wall behind him.

“We Bulgarians have a big chance to succeed in niche segments. Here there is cheap manual labour, creativity, innovation and the designing of original products.”

Times are tough in Bulgaria, politically and economically.

The last government resigned almost a year ago after a wave of public protests and few experts expect the deeply unpopular current administration to hang on much longer.

Around a million Bulgarians, including many of the brightest and the best, have left the country since the fall of communism 25 years ago.

On January 1 Bulgarians gained full freedom of movement in the entire European Union after eight countries including Germany, Britain and France dropped all remaining restrictions.

This has made exports, two-thirds of which currently go to the rest of the EU, hugely important.

In communist times, Bulgaria used to supply computers, canned food and armaments including AK-47 assault rifles to the whole of the Soviet Bloc, but those days are long gone.

Nowadays it relies heavily for exports on a Russian-owned oil refinery and a German-run copper smelter, and the Balkan country remains a major agricultural exporter.

According to the Bulgarian Industrial Association (BIA), Bulgaria is the world’s top provider of grains used for breakfast cereals — muesli and flakes — with a fifth of world exports in 2012.

It is the world number two in coriander seeds, sunflower seeds, duck meat and preserved cherries.

It also makes auto parts — it is a major supplier of sensors for airbags — and products like skis and snowboards.

But these are not always very lucrative for Bulgaria since they are often produced for firms abroad which re-package and sell them — often for a healthy profit.

“We need to move up the chain — from supplying just parts to other producers to being able to offer and market more finished products ourselves,” the BIA’s Veselin Iliev told AFP.

This is already happening, he says, with canny Bulgarian entrepreneurs already sniffing out opportunities and making the country “a leader in the export of niche products,” a BIA report authored by Iliev said.

Along with being a significant player in bikes — Ukraine’s Olympic cyclists whizz around on Drag products — Bulgaria is also home to Walltopia, HRT and Composite-X, the world’s biggest producers of climbing walls and the colourful plastic holds to cling on to.

“We are very energetic and we are clever. Innovations are everything,” says Ivaylo Penchev, 43, a co-owner in the three wall-climbing supply companies.

“If at some point we get the feeling that what we do is not novel and does not take us forward, we get panicky and immediately come up with something fresh.”

But both Penchev and Kouzov cited as a major problem the poor image of Bulgarian products abroad, and the “brain drain” making it hard to find the qualified young people vital in driving innovation.

“It was difficult to convince Swiss, Americans, French, Germans that something ‘Made in Bulgaria’ could be better than their local brands,” Penchev said.

“All our bikes are labelled ‘Proudly made in Bulgaria’ — we want to improve Bulgaria’s image. It’s a pity that the government does not do much to help us,” Kouzov added.