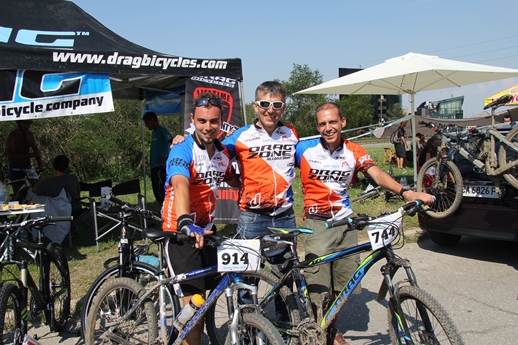 DRAG Bicycles and DragZone staff were well represented at this year’s Tour of Vitosha with 17 entered in the race.
This year’s Tour of Vitosha attracted a record number of competitors – over one thousand eager to run, walk or cycle the 100 kilometre route. DRAG Bicycles and DragZone stores were out in force with 17 competitors, including two women. DRAG CEO Dragomir Kouzov finished in 90th place in the men’s category in less than 6 hours.
The Tour of Vitosha – 100km goes from strength to strength with an increasing number of people – particularly cyclists, willing to test themselves to the full on the gruelling cross country course. This year was especially challenging as the race took place on one of the hottest days this year – 37 degrees celsius. A good 30-40 km of the route is in open countryside with no shade.
DragZone provided the prizes for the winners in the cycle race with vouchers for goods from its stores for the first three in the Men’s, Women’s and Children’s categories.