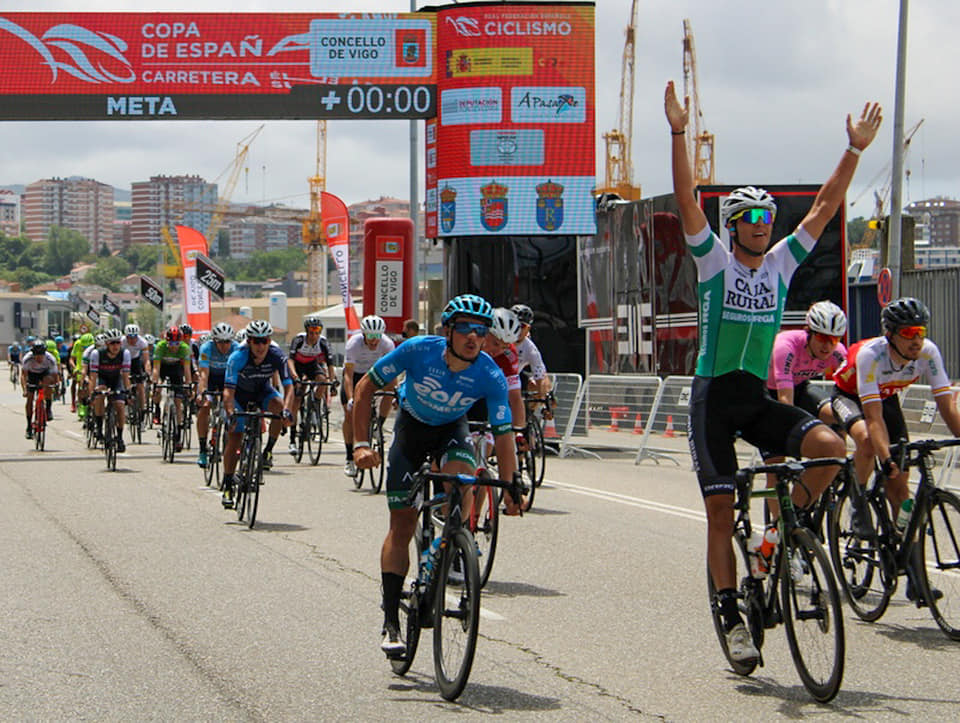 The city of Vigo has been the scene of the sixth round of the Elite / U23 Spanish Cup, which served to crown Marc Brustenga with a new victory and further tighten the general classification.

The Catalan shortens the gap with leader Pau Miquel after adding his fifth win of the season. For the other side, Alberto Serrano remains the leader of the Elite category.

After a first breakaway that did not disturb the peloton excessively, after the middle of the race, a more dangerous cut was formed with Julen Arriolabengoa as the ‘green’ representative. Despite having more than two minutes advance, the peloton neutralized before entering the tough and decisive circuit. It was the moment of the attacks seeking to break the sprint script, but finally the massive arrival was inevitable and Brustenga knew how to prevail over all his rivals.

Marc Brustenga: «At the beginning we were a little observant to see the options that the race could bring. If there was a big breakaway, you had to be there and try to surprise at the end. The whole team has been very good and we have been a solid block. In the final part we controlled all the attacks well and luckily I was able to finish the sprint. The allergy had made me loose performance in recent weeks, but for a few days I have been feeling well again. After the previous round of the Cup, which I could not finish, winning here is a demonstration that we are still here and that we are going to fight until the end ».

This website uses cookies to improve your experience while you navigate through the website. Out of these, the cookies that are categorized as necessary are stored on your browser as they are essential for the working of basic functionalities of the website. We also use third-party cookies that help us analyze and understand how you use this website. These cookies will be stored in your browser only with your consent. You also have the option to opt-out of these cookies. But opting out of some of these cookies may affect your browsing experience.
Necessary Always Enabled

Any cookies that may not be particularly necessary for the website to function and is used specifically to collect user personal data via analytics, ads, other embedded contents are termed as non-necessary cookies. It is mandatory to procure user consent prior to running these cookies on your website.